Summer has passed and it's time to get back to business. That means being more faithful about my blogging. When the weather is nice, I want to be anywhere but the computer, but it's good to return and share some captures from my wanderings.

I've been wanting to catch this bird for some time. 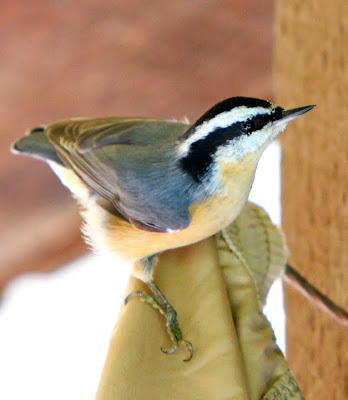 The red-breasted nuthatch makes a good noise for a little bird. If you hear a nasally ank, ank, ank in the forest you can be sure there's a small bird spiralling down a tree trunk, head first, somewhere nearby.

That sharp beak pries under bark for insects to eat and also gets used to bang a hole into the tree to live in, the same as a woodpecker.

Nuthatches eat seeds too and will come to feeders, but don't usually perch for long.

Both males and females have an unexplained habit of carrying tree sap to the nest and smearing it around the entrance. Like I said, it's unexplained.

Females lay five to six eggs and the chicks emerge after only 12 days of incubation. They don't stay long in the crowded nest before they fly out on their own. Their main predators are hawks and this bird lives on a property in the North Okanagan where a red-tailed hawk also nests and a smaller unidentified hawk was seen darting about the ponderosa pine and Douglas fir trees.
Posted by Heather Reid at 3:31 PM 12 comments: