Mine this time.
I'm at the start of a new journey, back to the closest thing I have to a home.
I've been in Port Alberni for two years and nine months, and it's been a good stop in my life. I've worked in the news business for the same length of time and that's been a useful experience.


Now it's time for me to create a new life in Victoria doing work that is near and dear to me, writing and photographing the natural world. Plus whatever else is required to pay the bills.
I'm sharing this news because I think I will be away from the blog for awhile.
Between here and Victoria I make a stop in the Okanagan for December to sell Christmas trees.
While I'm not a big fan of this commercial holiday, I have deep roots in Christmas trees.
I first worked a lot in Winnipeg nearly 20 years ago. The lot I'm going to run in Vernon, B.C. is one I opened 14 years ago.
The trees are local Douglas fir grown in a land-sharing program with B.C. Hydro under their power lines.
I have worked on that farm in all seasons over many years. I have pruned lower branches and sheared the trees into conical shapes with long machetes. I have worked alone on the mountain and I have worked with merry crews harvesting.
Some of the trees I will sell this year I may have first touched a decade ago.
I'm looking forward to this. 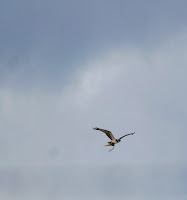 Then in January, it's on to Victoria.
In the meantime I may have stories to share.
For certain I will return to my stories from this Island in the New Year.

One day, while watching the osprey nest in Nanaimo, I watched an episode between the two nestlings that got me thinking.

They were waiting the return of their parents, and the fish that would accompany them.

They cried constantly. Then lifted off the nest and chased each other.


One of the birds had this tangle of rope caught in her talons.
The other chased aggressively. 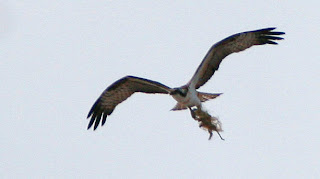 It was like that mad hour in human homes before dinner time. When kids are out of control with hunger and it feels like it could turn murderous at any time.

This looked that way, but maybe it was simple play. Many mammals and birds are known to engage in play of some sort. As it is for the human animal, the young are practicing skills they will need to use when it's time to fend for themselves.

In the case of these osprey siblings, they flew at eachother and made dives and dodges to evade attack. The one without the rope in talons picked up a sturdy stick at one point and tried to drop it on its soaring nest mate below. 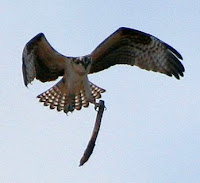 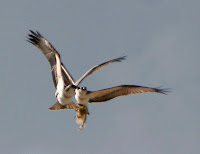 These birds, and their parents, would soon be leaving on a long trip to their wintering grounds in Mexico and the northern parts of South America. Besides the acrobatics, just working their flight muscles would seem to be a good idea before the journey.

Once the fish arrived, the pair returned immediately to the nest and didn't move again as a steady stream came in on the feet of their fishing guardians for the next half hour or so.

Posted by Heather Reid at 11:01 AM No comments:

I've been negligent with posts lately, but I'm not totally slacking.

The weather has turned to rain and wind, the osprey are gone. I'm less likely to be in the field getting new material but I am researching osprey migration.

There's a fair bit of information out there but not a lot specific to osprey from Vancouver Island. The short story is that most osprey from British Columbia winter anywhere from Idaho to Texas with the majority found in Mexico and El Slavador.

I'm sifting what I'm learning for the long version. Until then here's another shot from the Nanaimo group back in August. 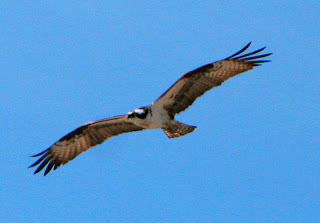 Posted by Heather Reid at 10:56 AM No comments: