Spent four glorious days on the west coast of Vancouver Island. Camped at Surf Junction and spent warm sunny days on the beach. 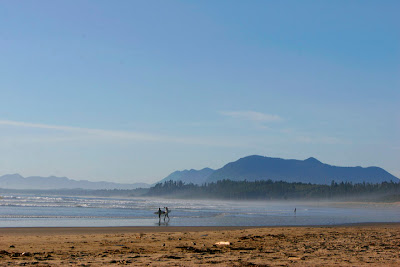 Late one afternoon a hake, deep sea fish, came up with the surf on Long Beach. Two people tried to coax the battered fish back out to sea, but it was done for. The body was rubbed raw and the fish didn't have the strength to struggle past the breakers to the deep.


Who knows what kind of day the fish had to wind up dying in the last of the sun.
Turned out to be a good day for a raven who spotted the fish and came in for closer observation. After a bounced landing on the sand a test prod with the beak elicited a full body flip and the raven took to the air again.


I puzzled over that. Surely the fish was weak enough for the bird to take. Couldn't the raven finish the job with its sturdy beak or did it not like its meal that fresh?


I returned to wave gazing and watched a woman try to send the fish into the water with her feet, then her hands for as long as ten minutes before she gave up.


I remembered being on commercial fishing boats as an observer and seeing tonnes of this species shovelled into the ocean dead, treated like garbage and realized that had made me see them in that way. As a worthless fish that didn't really matter. I liked that other people made no such judgement of the worthiness of this fish for their aid.


Then I thought about the raven. What about its free meal.


That train of thought ended as the bird returned, this time with a partner. The fish rescuers were further down the beach and the pair moved in for the kill.


I have read before of ravens sharing meals like this. Partly they need the help to rip and carry but it also seems to be an I'll scratch your back, you scratch mine arrangement. Not always between related birds either.


They ripped the fish into chunks and flew into the trees with their bounty.

I trundled down to the water's edge to see what was left.


The raven had plucked and eye, but left it. The head remained with what seemed like a lot of body still attached to it. 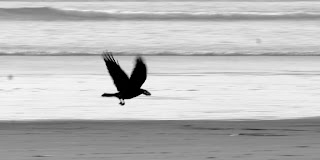 A few minutes later one of them flapped back in and swooped up the last piece of hake.


Posted by Heather Reid at 9:30 AM No comments: 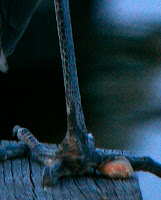 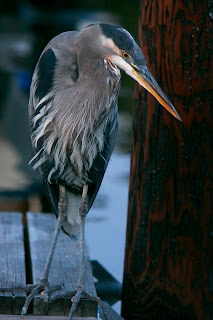 This heron looks fabulous but the photo at left hides the story.
The bird has sores on many places on its body. In this pose the long feathers hide them, but a close up of the foot tells the tale.
Also when the feathers are blown back there are areas on the body where it looks like there are open sores.
I don't know what this is. Many birds molt, and change over their feathers at this time of year, but that's not what it looks like.
This heron hangs out at a marina in Nanaimo, near industry and heavy recreation use.
Herons seem to have adapted well to living amongst humans. They are seen everywhere on the B.C. coast, but they are listed as a species at risk both provincially and federally.
Posted by Heather Reid at 9:48 AM 1 comment:

I returned on Saturday to an empty nest.
I scanned around until I located one of the young osprey sitting on the line of a ship docked at the port.
It cried a bit then flew off in the direction of the fishing grounds just over a small rise where the river pours into the sea.
I packed it up and went to see what the family was up to on the other side and it was like a different world.
At low tide, pools of water glittered on the mud flats. Rather than concrete and metal of the nest site, it was all water and trees.
The location of the nest was pretty unpicturesque but the fishing grounds were gorgeous and situated in such a way that I thought the parents could keep an eye on the nest while foraging. 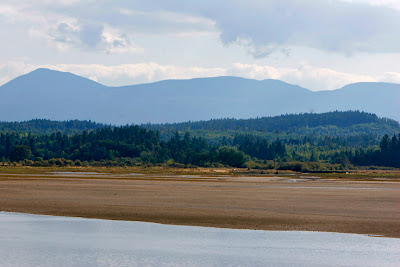 If so, both male and female would be able to provision the chicks earlier in the season. The typical osprey nest sees the female standing guard against chick-eating predators for months while the male runs himself ragged feeding the whole family.
If this pair have found a way to do both at once, that would be a significant advantage.
That would make an extremely interesting research project.
The fact that all four birds now spend time at the estuary means they may not be at the nest anymore. They are much more difficult to spot spread out over a large bay than sitting on top of a light standard.
Soon they'll be headed south. Osprey I've watched previously depart in early September for their wintering grounds in central and south America.
I may see them again, or I may have to wait until next spring.
Posted by Heather Reid at 11:56 AM 1 comment:

I started eyeing up the big orange structure and assessing the many stairs on it just before Mark and his assistant wandered over. They were employees at the port-loading facility and I thought this might be the part where I was asked to leave.
I was dead wrong.
The pipes over my head had been rumbling and the two men were checking to make sure something came out the other end. They stopped and we chatted for a while. Mark told me the real name for the big orange thing – container crane – not as technical as I would have expected. 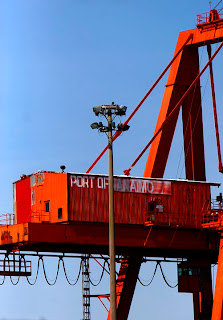 He suggested that would be a good place for me to be. I agreed and he gave me the number of the "guy that owns the thing." I couldn't imagine one guy could own anything of the sort.
This crane must be over 30 metres in height. You can see it from just about anywhere on Nanaimo's waterfront.
I had written off the idea of gaining access as ridiculous, but the thing is, if you ask, people usually help you out. In fact, I didn't even ask. It's got something to do with the birds.
I took the number knowing it would be a weekday thing to set up. As I discovered the next day, there  might not be another week with the osprey.
Posted by Heather Reid at 1:54 PM 2 comments: