A new view of Goldstream

Sometimes I falsely get it in mind that I've been there done that.

This was illustrated for me when my mother and I selected Goldstream Provincial Park as a Sunday hiking destination strictly because of how handy it is to the city. I've scaled the park's Mount Finlayson a few times — a challenging hike suitable for days when lungs and legs feel strong. I felt like I'd seen all there was to see at Goldstream. Not so. 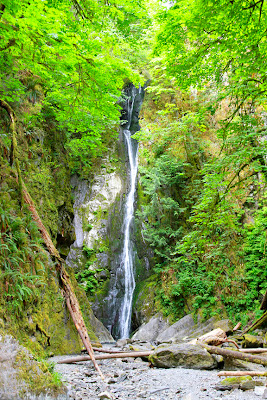 We explored trails I'd never trekked on the west side of the Island Highway.

A thin, long stream tumbling over a cliff that we first stood below craning our necks up to look at, then climbed alongside and eventually up above to watch it falling down into the clear pool at its base.

Embarrassingly, these falls are literally a two-minute walk from the highway and I've never seen them before. In 15 years, I've never bothered to stop, park and have a look.

That's a failure to appreciate my home that I try to avoid. I try not to get complacent about the beauty and wildness of Vancouver Island, British Columbia, or heck, the great, big country of Canada.

After the climb, the path continued through the two common forest types of this region Douglas fir, cedar mix and Gary Oak meadows.

We saw remnants of an old mine. Yep, was a time the people of Victoria searched for gold in them thar hills. Thus the name for the park.

A bunch of robins fluttered around in one low area where this barred owl sat in a giant cedar. The smaller birds mobbed and we watched until the predator silently flapped away to perch in another tree. 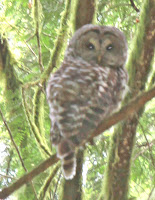 This has become the common owl in the Northwest while its close relative, the spotted owl, disappears.

Spotted owl pairs need large territories in old growth forests (also disappearing), but the barred owl can get by with second growth and thrives here, where almost all forests have been mowed down at least once.

The United States has finally come up with a conservation plan after years of fighting between scientists and loggers. What's being done in British Columbia? Not much. It's business as usual.

This article on The Tyee in 2007 provides the details of the decline and the politics involved. Here's another from this summer.

This photo is from earlier in the spring. 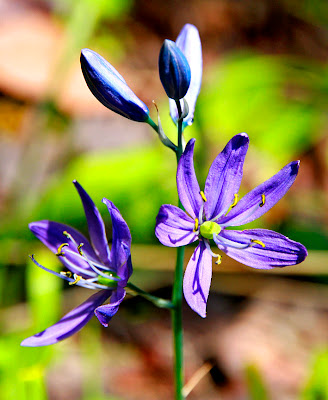 Found a great story about the importance of this plant — Camas quamash — to this region on the Beacon Hill Park history website. And I'm sharing because I seem to be lacking time to write.
Posted by Heather Reid at 6:31 PM No comments:

I brought my kayak down to Victoria from Sproat Lake in January and only just got it in the water on the Canada Day long weekend. 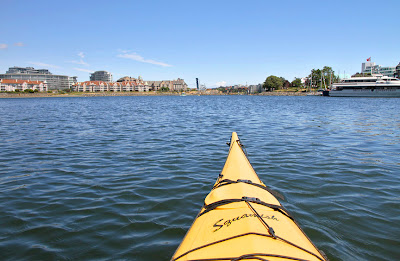 I hate to admit it, and maybe it's a good thing, but I've become a lot more cautious.

My kayak lives at Fisherman's Wharf in Victoria's busy harbour. As soon as I poke my nose out, I'm in the traffic. I need to be mindful of float planes, whale watching boats and big ferries like the Coho lest I make the kind of navigational error that make real mariners cringe.

Even worse than that, I don't want to be the unprepared novice in need of rescue who makes the six o'clock news. I do not experience the same hesitation about my terrestrial adventures, but perhaps I should.

I recognized myself in the movie 127 Hours as the solo hiker who doesn't use a check in person (I know  it's wrong Susie, I know).

I guess I find it hard to define when a day hike becomes an activity that requires such precautions. I think we are made to be fearful of outings that are not high-risk. I'd like to think I know when to let someone know where I've gone and when I expect to return.

So I took it easy. I took it slow. Got comfortable with getting my vessel on and off the dock (thanks for the handy grid Victoria Harbour Authority!).

Next time I may venture beyond Laurel Point. When I really get comfortable I will paddle out of the harbour and to sea.
Posted by Heather Reid at 6:19 PM 3 comments: