I'm off on vacation tomorrow.

If all goes well I will return in a couple of weeks with fabulous photos from Della Falls and the North Okanagan.

If not, I may get an eco-funeral courtesy of a creature like the turkey vulture. 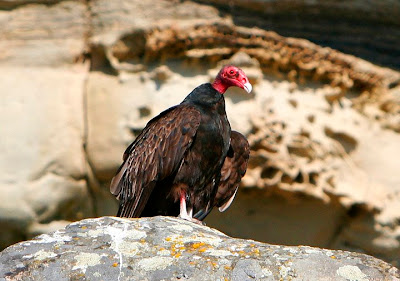 The hike to Della Falls takes three days in and out. I've not done a multi-day hike before and I'm going alone, so I'll confess to a little apprehension. Especially as people keep telling me I need 30m of rope to cross a river where a bridge is out and I can't for the life of me figure what I'll be doing with that rope.

I'm sure it'll be clear once I get there.

Birds I take for granted 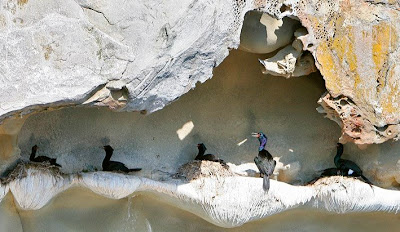 Cormorants fall into that category but like anything, start digging around and there's an interesting story there.
I saw these colonies of double-crested and pelagic cormorants during a lovely harbour cruise out of Nanaimo with my mother. 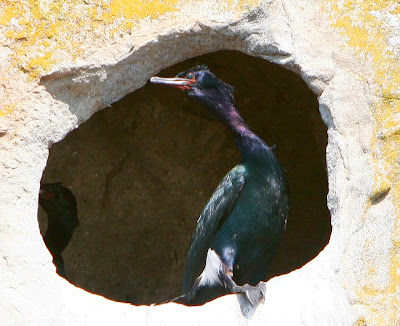 The birds live in impossibly small cliff nests on the west side of Gabriola Island.
Cormorants are unusual among seabirds in that they don't have waterproof wings. That's why they are often seen sitting on rocks with their wings spread out to dry. 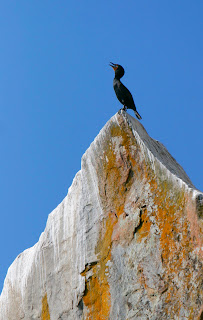 Most birds get their waterproofing from the fine structure of the feathers but waterproof birds are buoyant birds. The cormorant trades being dry for the ability to dive to depths of up to 40 metres.
Under the water they are agile swimmers and pursue fish and small invertebrates.
Young cormorants in colonies form groups called creches that they hang around with when their parents are out gathering their food.
Cormorants, and especially their young, don't make it hard to imagine their reptilian link to the dinosaurs.
Posted by Heather Reid at 7:19 PM 1 comment: 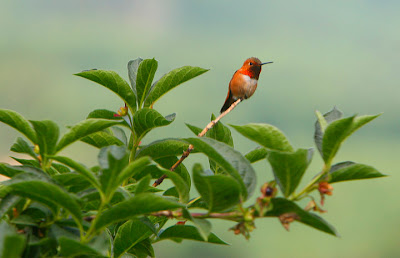 A male rufous hummingbird sits in a twin berry bush just outside the window where I band.

I got my hummingbird banding licence in the mail from the Canadian Wildlife Service last week. Just in time for the Saturday morning session.

I wrote about the Hummingbird Monitoring Network here and here when we started in April.

We get up earlier and earlier to have the traps open a half hour after sunrise. These days, that's 5:15 a.m. I'm getting up at 4:15 to be there. Did I mention I'm not a morning person?

Things have slowed considerably from our big 135 bird day. Last weekend 22 rufous hummingbirds got caught in the traps out near the estuary.

It's expected that the number of birds will go down as the migrators pass through heading for points north or inland. The unusual thing this year is how many males are still being caught this late in June. 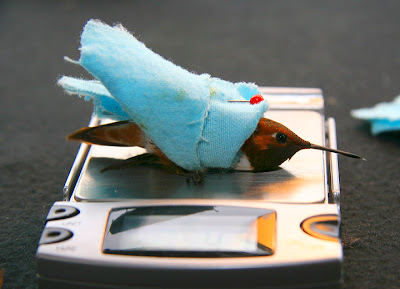 We wrap each bird in a blanket and take various measurements as well as placing a
band around its leg. This male is getting weighed, the average is around 4 g.


We don't know why. It is one of the many questions that may be answered by this project some day.
Posted by Heather Reid at 2:54 PM 1 comment: 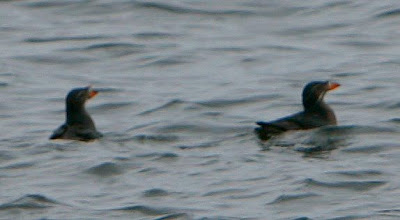 This is not a great photo but I can't resist introducing these cool little seabirds.
Rhinoceros auklets. I caught these two on the May trip to the San Juan Islands.

You may just be able to make out the horn that grows on the upper base of the beak. Thus the name. This horn is used to dig burrows where they stash their young while out at sea feeding.

The auklet is not an auk at all, it's really a puffin. It's unusual in being mostly nocturnal. In the day rhinos are on the water. At night they take care of business back at the colony where they compete for burrow sites, dig, lay eggs or feed their young.

Females lay a single egg and both parents put all of their energy into ensuring the survival of that one chick. That involves taking turns on the egg for about 45 days then provisioning it with a steady stream of Pacific sandlance for another 55 days or so. Herring or young rockfish will also do in a pinch.

The entire Scott Islands group is protected as a provincial park and a federal Marine Wildlife Area. The three outermost islands – Triangle, Sartine and Beresford – are ecological reserves and a permit must be obtained from B.C. Parks in order to visit them.
Posted by Heather Reid at 9:15 PM No comments:

It isn't easy being green 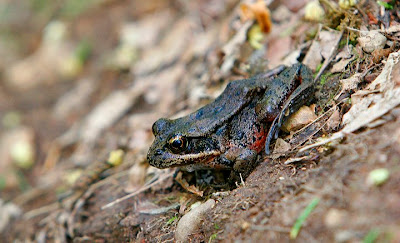 Red-legged frogs are nationally listed as special concern by the Committee on the Status of Endangered Wildlife in Canada (COSEWIC) and they are on the provincial Blue List.

The California variant of this species has been listed as endangered. In the U.S. once a species is listed, that's it. The recovery plan goes into overdrive and they seem to take the whole thing very seriously.

Despite having 186 animals on its Red and Blue lists, the province of B.C. doesn't have any legislation for doing anything about these disappearing creatures.

Federally there's COSEWIC and the Species at Risk Act (SARA) but what do they do?

“There are 449 species listed under SARA and next to none are receiving adequate protection. Instead of working to protect Canada’s endangered species, the federal government is working to evade the law intended to protect them,” said Susan Pinkus, Ecojustice conservation biologist.

The only critter Canada has done anything about aiding is the Banff springs snail which was already protected because it only exists in the National Park.

I'm not in support of elaborate plans and restrictions to save single species. These are big picture problems showing up in small picture situations. It's the big problems that need to be solved.

This frog's global status is listed as imperiled, I guess that's a step up from endangered.

Reasons for their decline have been listed variously as:

Oh, to be a frog in this big, bad world

At this point the global picture is sending us warnings, in so many shapes and sizes, that suggest the planet's life-giving systems are on the brink of collapse. It's shocking that the goverments of rich countries like ours think they can keep playing the game by the old rules.
Posted by Heather Reid at 10:47 AM No comments: