Ok, Ok I had it all wrong.
On return to the nest last weekend the situation quickly revealed the family's structure.

On arrival there were two osprey on the nest, crying incessantly. That makes them chicks but I never would have guessed it by size.

For some time they just sat waiting for their fish to be delivered.
At last they got off the nest and flew around chasing eachother in what could have been play or could have been a more sinister kind of sibling rivalry. 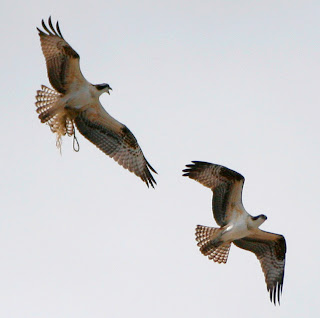 It's not uncommon in raptor nests for the stronger nestling to do away with the weaker, but that's much earlier on.

These two are pretty much full-grown and not likely to risk injuries from a battle with a nest mate.


As they flew, the rope-tangled talons came into view, meaning it's one of the young with the problem. But she's huge. I would never have believed that was this year's offspring if the parents didn't come along shortly thereafter.

Until then, the fledglings soared around taking pot shots at eachother but once they heard the call of a fish-bearing parent they rushed back to the nest. 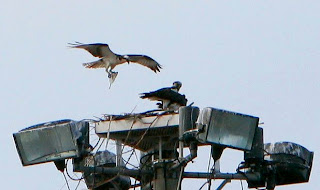 From that point on it was a steady stream of what looked like perch brought over by both adults.

Five fish came in the 30 minutes I stood there watching. The adults were still out fishing when I left to get my dinner.
Posted by Heather Reid at 11:56 AM No comments: 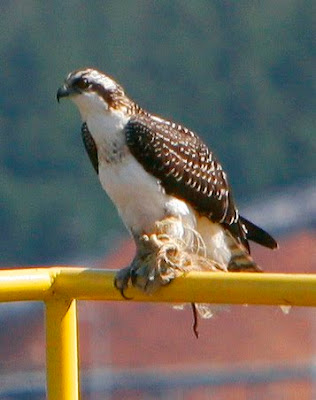 Back on the boat, editing photos, I could zoom in on the rope and got more concerned as it looked like it had been tight on the upper leg and rubbed feathers away and into the skin.

My instinct always is to leave well enough alone, but I didn't feel right knowing she could be in trouble and not consulting someone.

I ruled out the government agency. I pictured nets being dropped from a helicopter on an animal who can likely solve her own predicament.

I looked up the local rescue agencies. Rang one number, no answer. No surprise on a Saturday evening. I didn't leave a message.

Within ten minutes, Lorinne called me from Second Chance Wildlife Centre. I gave her a sketch of the situation.

They wouldn't attempt to catch a raptor on the wing. Whew, I liked that answer.

We talked for a while and she told me about a recent rescue of a juvenile osprey.

The bird had landed on the Gabriola ferry with the marks of an eagle attack. Lorinne retrieved the bird and immediately shipped it by floatplane to O.W.L. on the mainland in Delta, B.C.

She asked if I was around for another day as the bird would be back for release soon and would I like to be there?

Tough question, that part of me that doesn't agree with the interference goes against the other part that wants to be as near as possible to these birds and the part of me that believes that wildlife rescue, when done well, helps keep some populations going in a human-dominated landscape.

She said she'd call over to O.W.L. to find out when the release would happen.

It seemed the young male didn't know how to fish yet and they wouldn't free him until he did. There were training sessions going on with a pool and goldfish. Lorinne said osprey are hard to rehabilitate because they are fussy eaters.

Lorinne and I both wondered whether the rope had come from someone trying to catch her.

I gave her the nest location so she could monitor, or get people who work at the port facility to keep watch.

If she comes to ground exhausted or hurt, they will pick her up.

Looks like weekends in Nanaimo will be the new regime. I hope the rope is gone when I see her next.
Posted by Heather Reid at 11:00 AM 1 comment:

For the Duke Point trip, I had no map. I drove all around the industrial park and the ferry terminal on the little finger of land poking into Georgia Strait.

Heading down the last road, I ended up in a log-sorting yard on the water next to what looked like a mountain of salt and a huge, red, ship-loading structure (not the technical term).

Ready to call it a day I sat, looked at the log booms and containers on barges sitting in the bay.

A dark figure perched on a nearby rail caught my eye. 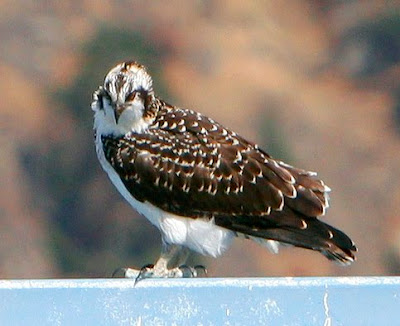 To the untrained eye, it could have been an immature sea gull, or a bald eagle, but I knew immediately that the white speckles on the brown back meant one thing. Osprey.

I quickly got my camera out and photographed its back in case that was all I was going to get.

It soon tired of my attention and lifted off, and I was prepared to be thankful I saw anything until I followed its flight to the top of a light standard in the middle of the huge concrete loading area.

It flew to the sound that had been nagging me from over my left shoulder. The sound of big, hungry, young osprey waiting for fish. 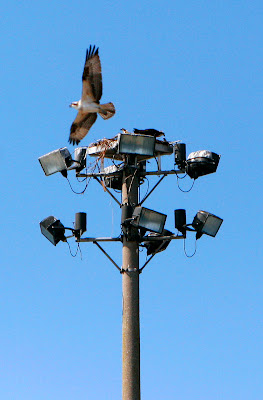 It was more than likely the male I first saw, quickly getting a bite of fish before delivering the remains to the mob on the nest.

From what I could tell, the female and one nestling were up top and once they tore into the fish the flapping and crying stopped.

Sometime later I saw two on the nest with two perched nearby, suggesting the typical brood of two young but they were so big, it was hard to tell who was who.

Also, the band of dark feathers at the neck that usually signifies a female seemed to be present in all of them making it more difficult to decide who was the mature male and who a big chick. The female adult stood out because she's bigger.

She stood out for another reason, too.

After the feed, two birds came back to my level at the rail. The mature female seemed to be carrying moss in her talons. Nest repair? A bit of a surprise as what would have been a deep cup nest earlier in the year was now flattened. The platform was more like a meeting place than a shelter. Fledglings and adults don’t need a nest, just a fish-delivery point.

As the female passed over me, I could see it was rope tangled in her feet. Closer still and I saw it was old yellow polypropylene, about a quarter inch, that she'd been worrying at. 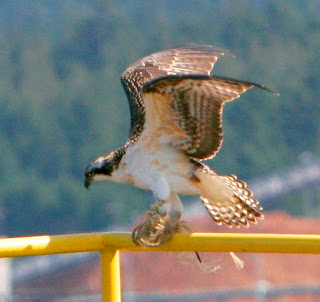 It's surprising she couldn't free herself with her razor-sharp beak. Then again, I couldn't know how long she'd been dragging it around.

I continued snapping, wishing I could just cut that rope off her, but she didn't look distressed or bedraggled. I watched for a while longer and left them in peace.
Posted by Heather Reid at 11:46 AM 2 comments:

Next I headed out toward the Nanaimo Lakes area where I had looked a few weeks earlier.

That search ended at a TimberWest gate where a nice young man told me I had to pay two dollars to continue to the lakes.

What? A logging company, given public forest land for free by the B.C. government, now wants to charge me to go to the lake?

I don't think so.

I ended up looking along the Nanaimo River that day with no luck. Had a really nice swim, though.

The rumoured nest I was looking for was supposed to be in a patch of woods that had a no trespassing sign on one access point, which I skirted around until I found a path on the other side.

As always, prepared for my task, I tiptoed over thorny blackberry vines in sandals leaving trails of blood.

But the man at the wharf told me about another nest out at Duke Point, where the ferry runs from Nanaimo to Tsawwassen. He said I could get permission to visit the site when the port office opened on Monday.

Off to Duke Point. 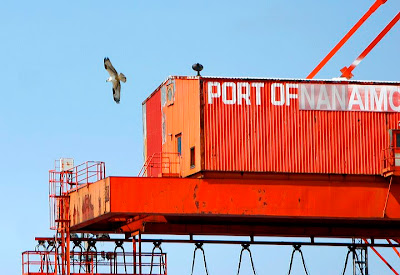 I'm not going to say how I knew about the first two locations. OK, I will. I Googled ‘osprey nests in Nanaimo’ and they were pinpointed on Google maps. Ahhh, the cushy life of a modern naturalist.
Posted by Heather Reid at 12:17 PM No comments: 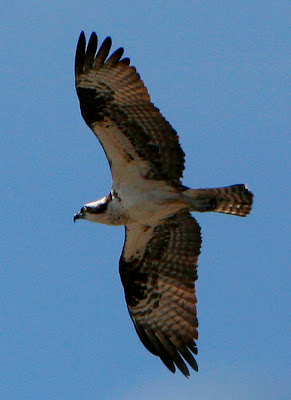 At long last I have found an osprey nest.

I have been, somewhat casually, tromping around lakes and wading up rivers around central Vancouver Island looking for something that is often conspicuous. When I found it, it was.

I had two leads to follow around Nanaimo – the Port of Nanaimo Assembly wharf and a cluster of trees just off the Island Highway.

I started at the wharf, a huge loading area for heavy industry right downtown and next to the Gabriola ferry terminal. I checked in at the commissionaire's office. Locked. No surprise on a Saturday.

So I drove on out passed the many 'NO UNAUTHORIZED PERSONNEL' signs until the guy in the green truck raced over with an amber light flashing and stopped me.

I find there is nothing wrong in these situations with using a little female charm and he led me to where a nest had existed earlier this summer. It was right at the water's edge, high up on a light standard with a flat platform on the top. An invitation to osprey.

He couldn't help himself. He told me how it had two chicks but that the parents abandoned them. They still saw the osprey around, he said.

What may have been seen as abandonment may simply have been that the chicks were ready to fly. I didn't get the whole story from him.

For now, there were no osprey around. I decided I could call back to learn more and continued on my search.
Posted by Heather Reid at 10:25 AM 2 comments:

Oh finally. I have found an osprey nest.

It's not quit what I had expected – it's in Nanaimo in a heavily industrial area – but I got my fill today.

That's not true.
I got a taste and there's a story that goes along with the 115 photos.

For now, here's a look at what makes my heart beat faster. 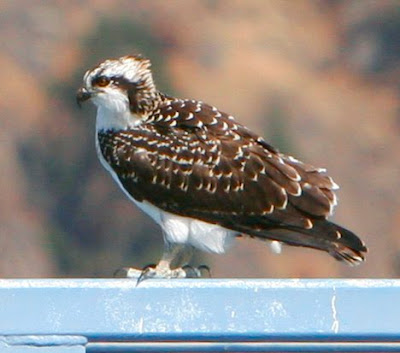 Posted by Heather Reid at 6:05 PM No comments: 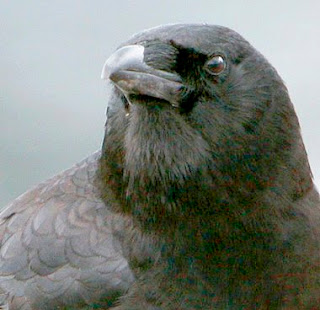 There is so much going on in bird behaviour research right now.

Here are the latest bits of research rocking the foundations of the old bird brain stereotype.

The big paper documents New Caledonian crows using tools in sequence to solve a problem, without any prior training. That's not been seen in any animal before.

The other published study, with video, has rooks using objects to raise the water level in a container to a level their beaks can reach. That's not really news though. Aesop recorded that one many centuries ago.

Now, if only I could find that article about the part of the brain this intellectual might was stored in. Because I know everyone is just waiting to learn the name of the structure.
Posted by Heather Reid at 11:21 AM 4 comments: