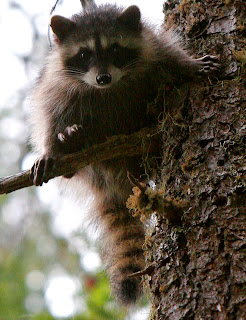 I'm used to seeing these guys in town. Either this is a young raccoon, or the forest version isn't as plump as their city kin.

I first thought that an old forest next to the ocean shore would be rich with food for such a scavenger. But maybe it doesn't measure up to the contents of dumpsters and compost bins in town.

Raccoons can live as long as 16 years in the wild. Most don't make it past their second year, when they become independent of their mother.


After that, raccoons are solitary animals. They are also nocturnal, though this one had some business keeping it up during the day.

I love their hands. Little primate-style hands on a rodent (I read that they are more closely related to panda bears than anything, but still).

Port Alberni is situated up a long inlet from Barkley Sound and the Pacific Ocean on the west coast of Vancouver Island. It's easy to forget about the ocean here, what with the mountains and big trees.

I took a hike to one of the places that allows me to visit the sea on a trail created by an old Canadian Pacific Railway line.

I glimpsed a sea lion that breathed so loudly, I first thought it was a whale. Didn't get a pic of its enormous back folding under the water.

Others, like this little song sparrow, came out from under the beach litter to investigate me. 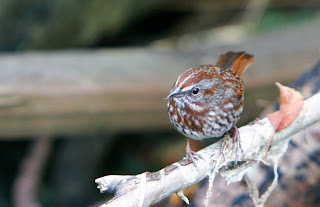 And I found little scenes in old iron that intrigued me. 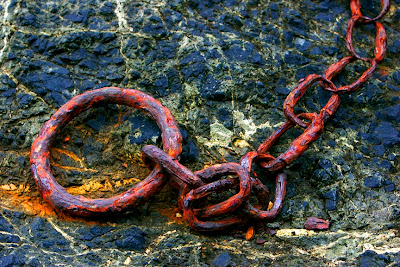 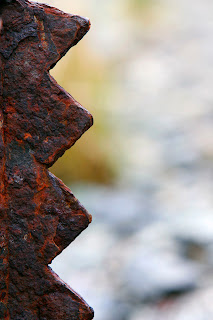 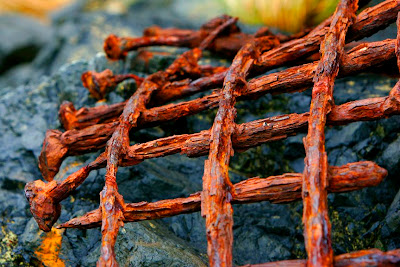 Posted by Heather Reid at 10:39 AM No comments:

Things I know about osprey

It's been a busy time of bathroom renovating, working and planning for a big change. I haven't been out collecting material – didn't see any critters during the bathroom reno, which is a good thing.

Still thinking about osprey though. Here's a list of osprey facts that came off the top of my head.

They have no near relatives. They are somewhere between a falcon and an eagle. Latin name Pandion haliaetus.

People call them fish hawks. They eat fish only.

Females are bigger than males because they defend the nest from predators like bald eagles.

They have what's called a nictitating membrane on the eyes that protects them when they dive into the water head first.

They dive in head first but come out with fish in their talons. (Would love to see the underwater roll).

They shake like a dog when they exit the water.

There used to be colonies of 200 to 300 nests in parts of eastern North America before DDT reduced their numbers.

They don't seem bothered by human activity and often nest in the open, in busy ports and urban areas. 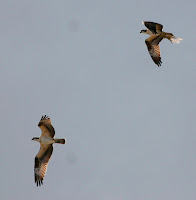 They are one of the most cosmopolitan species of bird, living around the world on fresh and salt water.

North American osprey winter from Mexico south to Northern Argentina. There are some year-round residents in parts of the Southern U.S.

Posted by Heather Reid at 10:30 AM No comments: