Photo tip #2: The Rule of Thirds

Okay, some people will hate this. How can you be creative following a bunch of rules you may ask.

Well, I love rules (as long as they suit me) so I can't relate to that, but you better believe that even Da Vinci learned the rules before he threw them out the window and did his own thing.
The rule of thirds relates to the Golden Mean, the magic ratio that turns up again and again in nature and human design. Why? Because it works. Most people think symmetry is where it's at (okay, I believed that for a long time) when in fact the brain and the eye like things that are a little off. Things that move the eye around instead of just letting it plonk on a subject and sit there, doing nothing.
Here's what I mean. 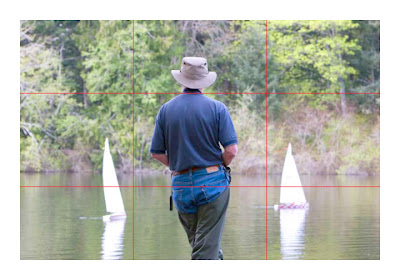 This photo places the subject smack dab in the middle. Very nice job of centering that man and ensuring nearly perfect symmetry with the boats. Problem is, that's boring. Your eye gets stuck on his bum.


Now, here's an image that lets the mind do a little travelling. 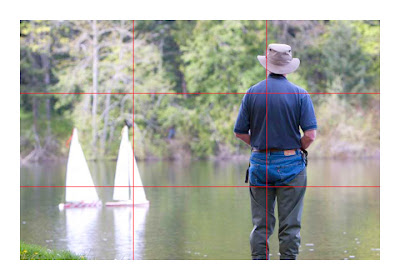 This is what you want in a photo, a little trip inside the viewer's mind.
Never mind that the boats are overexposed. That's not relevant to this discussion.
It's very simple. Imagine a grid in your view finder that divides the rectangle into nine equal segments, like the red lines in the photos above.
What you want to do is place the subject at one of the four intersections, or put a horizontal feature (like the horizon) on either the lower third or upper third of the frame.
On some cameras you can impose a grid on your viewfinder. Check through your features and manual to see if you can. After a while you won't need the guide.
And by all means, if the subject is perfectly symmetrical and that's just what you want to show, do it. But try playing with the rule of thirds to see if it makes some photos more dynamic.
Posted by Heather Reid at 2:25 PM No comments:

Read my story about the eagle nest cam phenomena in today's National Post.
http://www.nationalpost.com/life/story.html?id=2916133
Posted by Heather Reid at 1:32 PM No comments:

I read somewhere recently that a good blogger offers readers something.

With that in mind I'd thought I'd do a little series of tips for people who want to take better pictures. Everyone has a camera right? And we've all been there, sorting through dozens, sometimes hundreds of disappointing photos.
I'm not going to get into hard-core technical stuff, just a few of the first things that I learned that improved my pictures almost right away.
Here goes.
Tip #1: Get closer to your subject
Yep, sometimes you're photographing the big picture and you've intentionally made the people really small, standing next to the Pyramids or what have you. But most of the time, when you're photographing people get that lens right in their face (probably better to zoom if you don't want Aunt Ethel to give you a good whack upside the head. And if you don't have a zoom, and there's no threat of violence, use your built in feet).
Since I don't take pictures of people (unless I have to) I'll use bird photos to illustrate. 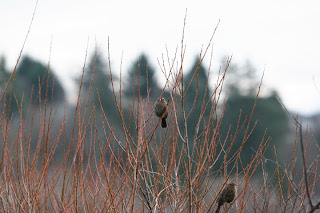 Here we have two female red-winged black birds in a winter scene. Wow wee. Pretty drab.
I have done nothing to this photo, it is exactly as shot. At the time I liked the two birds facing in different directions and thought I might be able to do something with that once I got home to the digital darkroom (computer). 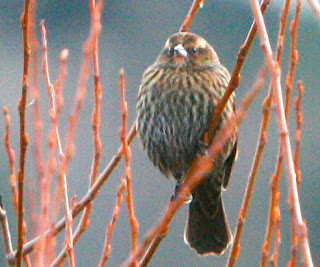 And here we have the much-manipulated final version that I decided was too poor quality to be of use, but still illustrates the point that the close up of the bird is far more eye-catching than the picture of the bird where it's about the same size as a pencil eraser.
There you go. Photo tip #1 is get closer to your subject. And this is for you folks, it's not just a way for me to make use of photos that I would otherwise deem too grainy and unfocussed to show. Really.
Posted by Heather Reid at 8:23 PM 3 comments:

Been thinking again about the way I take some species for granted.

I mean really, what isn't gorgeous and fascinating about this creature?

In some places, if there were no robins, there would be no bird life at all. You can reliably count on meeting them daily, wherever you go in this part of the world.

Look at that clear eye, the orange breast.
It's that flash of colour that reminded English settlers in North America of their dear little robins from home. This bird is really a thrush, though.

The song of the robin provides the background sound in cities and on farms from first light into the dark of night.

Cool fact. The American robin can stretch its esophagus to store food overnight. Very useful for getting through a cold Canadian winter with a light feather coat.

Common species like robins are often the first wild life children discover. Because they can be observed so conveniently and reliably they also make good species for study. Given the right question, a person of limited mobility could complete a master's or Ph.d from their kitchen window.

Thank you robin, just for being there.
Posted by Heather Reid at 10:21 AM 1 comment: