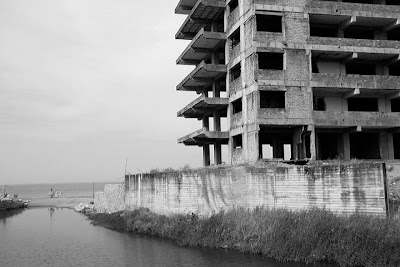 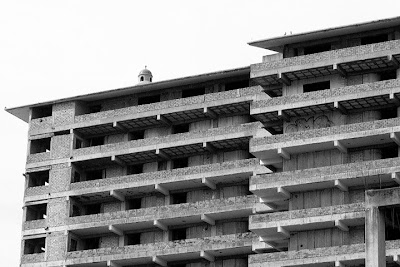 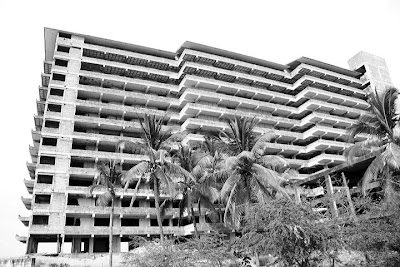 This is the development that sat between the place I stayed and the ocean. It really pissed some guests off but I found it added intrigue to the otherwise white-bread Hotel Zone.
The story I got on the 13 story building was that an East Indian billionaire started the project but died before it was finished. A family dispute over his assets and some intervention by the Mexician government has resulted in the building being left in this state for 12 years now.
It's a major landmark on the Bay of Bandaras as it's the only structure that tall on that stretch of the beach. I used it to gauge how far I'd walked during a day because I could see it from anywhere on the shore and know my room was next door.
The property is fenced to keep squatters out and some poor guy enforces that as a 24/7 security guard. He doesn't keep the animals out, though. This is where I saw iguanas and green lizards and many bird species climbing around the palm trees and also darting in and out of rooms.
The waterway in the first photo is where I photographed the herons and egrets below.
Posted by Heather Reid at 10:40 AM

these are beautiful. so nice to find your blog!

and such a sweet simple layout
pleasekeeponkeepingon,
cheers, mm