To say I'm happy with my new camera outfit would be a bit of an understatement. I resisted as long as I could, in loyalty to my old 20D, but I have to admit that five years in digital technology time makes a noticeable difference. 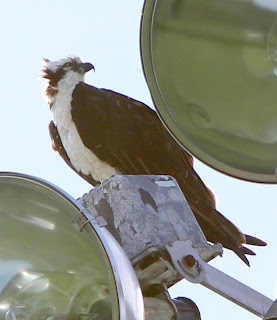 Once my 70 to 200mm lens arrived I practically ran up to the University of Victoria to snap the pair I've been following up there.

These two have opted to nest on a light standard stuck between the soccer pitch and the track and field facility. That means it's a busy place, not only home to the uni athletes, but also the site of competitive sports between people much younger and older than that.

And the funny thing is that the osprey kind of squawk through the commotion. Like they didn't choose to nest in a busy urban environment, for at least the second year running.

The good thing about osprey is that they can fledge chicks just as well from a nest in a grocery parking lot as they can from one over a remote boreal river. In fact maybe the squawking isn't even a complaint (as it sounds to my human ears) but a greeting.

On this day, the fields were empty. Here, the male delivers a fish to his mate, whose posture suggests she's dealing with chicks. Right on schedule.