Everyone’s had this experience.
You learn of something for the first time – a new word, or food, or person you’ve never heard of before.
Then it starts popping up everywhere. In the Saturday restaurant review, in a conversation overheard on the bus. You wonder how you were in the dark for so long.
Don’t get me wrong, I’m not necessarily talking about a new trend. More like something that somehow never hit your radar.
This happened to me with Indian pipe last summer.
This is one of those oddball plants that aren’t really plants. And I’ll admit, I’m not as attentive to the flora of the Island as I could be. The same way I neglect poetry in my literary explorations.
Still, you’d think this freaky, not-quite-a-plant-thing might have come to my attention sooner.
Let’s back up a bit.
I’ve explored the forests of Vancouver Island for nearly 15 years, often in the company of people who do possess a body of botanical knowledge I can only envy.
Yet, the first time I observed Monotropa uniflora (notice how smoothly I slipped in that Latin name) was this summer, reading another nature blog. 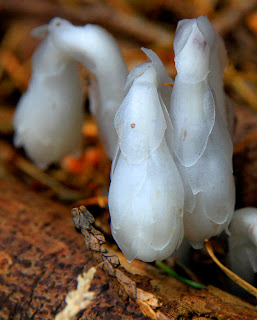 Just a couple of weeks later, I was climbing up Mount Galiano and there it was. Ghostly, white nodding pipes. More like a mushroom than a plant. Definitely Indian pipe alternately known as ghost flower, ice plant or corpse plant.
Indian pipe is neither a plant nor a fungi. It's a parasitic myco-heterotroph.

Yikes, what does that mean?

Fungi that are in a mutually beneficial relationship with tree roots act as hosts for this organism that uses hormones to steal the tree's sugars from the fungi.

It does not photosynthesize, as all plants do. The leaf like structures are vestigial, from the days before this plant came up with an easier way to harness the sun's energy than photosynthesizing itself.

The Salish people called Indian pipe wolf's urine because they found it growing wherever wolves marked their territories.
Posted by Heather Reid at 1:02 PM

Hi Heather
Just because it's in the oddballs in Pojar doesn't mean it's not a plant. It is a flowering plant that just doesn't have any chlorophyll. That nodding over part is its flower which will gradually straighten up as the seeds ripen.

(Glad you are back writing--I've enjoyed your articles since you were reporting for the AV Times.)

Thanks for taking time to read and comment. Like I said, my botany knowledge lags far behind my bird trivia.

I guess I, and probably a lot of people, consider chlorophyll and photosynthesis as defining characteristics of plants.

Do you live in Port Alberni? Have we met?