The price of gold 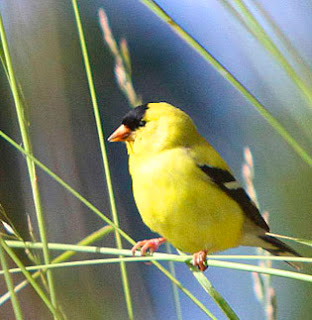 Here's a lovely and common bird. The American goldfinch is a true North American. Some breed in southern Canada and winter in the southern U.S., others live year round in the central States and northern Mexico.
They do well in human-dominated landscapes, but I bet many non-birders have never seen one despite the male's bright breeding plumage. Birds go about all kinds of business under our noses. Even keen birders miss them. If you don't know what to look for, or you're just not looking, the rarest of creatures could fly by and never be noted.
Goldfinches are relatively common, so keep your eyes peeled.
That attention-grabbing plumage comes at a price.
It's long been know by biologists that lush colours in birds and other animals represent fitness to potential mates. In other words, the stunning bumble bee combination of this goldfinch, says to the more drably coloured female 'hey, my genes are good, if you were thinking of laying some eggs, I'd be your guy.'
The idea is that to have such a display, the creature must maintain a good diet to get the nutrients to produce the colour. In other words, a good provider. Additionally, such a brightly coloured animal must be clever enough to evade predators despite wearing what amounts to a high vis. vest. This is the theory of sexual selection. It has lead to the evolution of fantastic colours and bizarre appendages in a wide variety of animals.
Interestingly, the dietary aspect of the theory wasn't tested until 2003 when scientists from Cornell University restricted the food available to a male American goldfinch. They found less carotenoids in the birds' blood and eventually grew rather drab feathers.
In our diet, carotenoids can be found in bright orange and yellow fruits and vegetables and also contribute to human health in many ways.
So, theory proven. Hopefully those hungry little goldfinches got fattened up and returned to their glorious hue after their service to evolutionary science.
Posted by Heather Reid at 6:33 PM