A question of culling

There's been talk lately of culling deer on southern Vancouver Island. In Garden City, it seems, folks are fed up with herds of herbivores chowing down on their pansies and petunias.

While some talk, others have been hunting in the suburbs with crossbows and leaving beheaded deer carcasses behind.
Wolves and cougars keep populations in check in less urban areas on the Island but cities offer refuge for deer and the open habitat with a wide variety of foilage they prefer. Wolves and cougars that follow them into town get shot on sight.
Besides reducing annuals and perennials, large deer populations remove the shrubs and plants songbirds rely on — especially on islands. 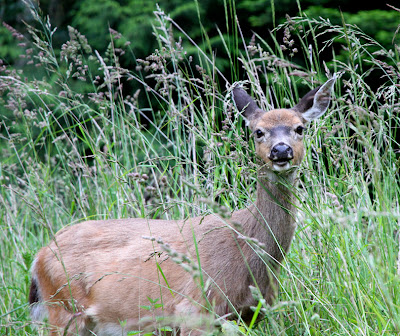 The results of recent research done on the San Juan Islands (where this lovely creature was photographed) suggest that the larger the deer population, the fewer kinds, and numbers, of birds.
A similar study done on Haida Gwaii in 2005 found songbird abundance 55 to 77 per cent lower on islands where deer lived for more than 50 years, compared to islands with no deer.
Similar problems exist in the Gulf Island archipelago to the east of Vancouver Island.
The researchers state that if deer are not actively managed, local extinctions of native plants and birds will accelerate in the decades to come.

I'm generally not for human interference with wildlife, but humans tend to be the cause of such problems. Animals are introduced to places they may not have colonized on their own because we want to eat them, or look at them.
And songbirds already have enough to contend with as they are hunted by house cats, lose habitat to development and fly into windows. Migratory bird populations are in sharp decline across North America. Birds will be further threatened by the effects of climate change. 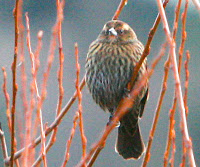 Or maybe we should leave well enough alone since our meddling usually creates more problems.