An 80-foot boat sank off Cape Alava in Olympic National Park in the state of Washington last Thursday. That's not far from here, so the people who organize BC Beached Bird Surveys, Bird Studies Canada, have called for volunteers to scour the coasts around Victoria and area for signs of oil or animals in distress due to oiling.

I've been a volunteer beached bird surveyor since last January and have only seen one dead bird in that time. Thankfully. The purpose of the program is to gather baseline data on the incidental oil already washing up on our coast and the impact it has on wildlife. This with the hopes of keeping the moratorium on oil tankers tripping through Georgia Strait, the body of water between Vancouver Island an the mainland.

The vessel in question sank with over 14,000 litres (or 3,800 US gallons) of fuel onboard. I can't picture how much that is, but I do know that one litre of oil can contaminate two million litres of water. Thank you Transportation Tune-Up.

I also know what a beach littered with dead birds looks like. 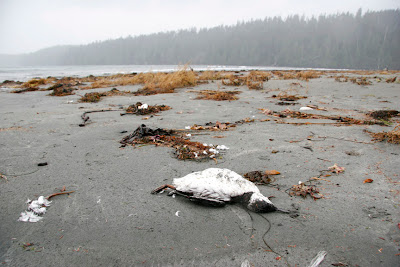 I came across this die-off of common murres at Pachena Bay near Bamfield, B.C. in 2008. It's what got me started in the Beached Bird Survey.

I hope not to see anything like it when I head out to do the emergency survey this week.
Posted by Heather Reid at 8:34 PM