Osprey on the island

It's been hard to know how many osprey are around the Victoria are because I have little time to watch them.

I saw this one at Patricia Bay on the Saanich Inlet in early May, handily scooping fish from the shallow waters. 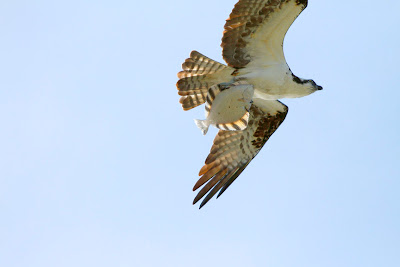 This would be pre-nestlings, so the birds aren't yet rushing about. 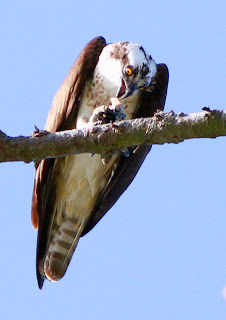 There's time for perching and eating without disturbance.  That will have all changed by now in nests that have successfully produced young. I know of two in the Victoria are that I'm concerned about.

One is in Esquimalt and the female on that nest died last summer after fledging two chicks. The wildlife rescue centre that received the dead bird reported that she was riddled with tumours but they did not manage to do a necropsy (long story).

The other is the nest of the campus sweethearts from last summer. They lived high above a soccer field at the University of Victoria. So far this year, I have only seen the female hanging around what remains of the nest, seemingly waiting for the arrival of her mate.
So there it is. There are plenty of osprey to chase, and not the time to do it in. I'm planning though, don't worry, I'm planning.

Your photograph of fish in an Osprey's hands - majorly cool !
Thank you.
-David
http://inspiringlandscapes.com/blogimg/