I read a lot of comic books as a kid. Well, as an adult too. Giant grasshoppers and runaway tomatoes are imprinted on my brain.

Giant kelp is a real life plant, or algae, that lives up to the comic book hype. 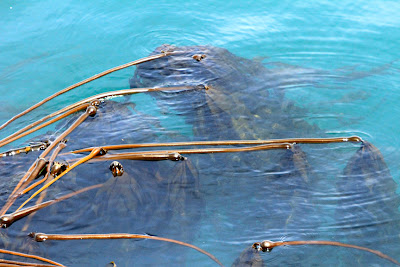 Giant kelp and bull kelp are two characteristic species of algae on this coast. They wash up on the beach when they die and become whips in the sandy adventures of kids walking the shores.
Giant kelp grows an average of 27 cm per day in the spring. It can grow as much as 61 cm in 24 hours. That's two feet!
These tree-like algae form underwater forests where invertebrates, fish, marine mammals and birds find food and shelter. Even grey whales hide from killer whales amongst the stipes.
The popular image of a sea otter (not to be confused with the much more common river otter that is seen in the ocean around southern Vancouver Island) lying on its back, surrounded by kelp with an urchin between its paws illustrates and interesting interrelationship between those three species.
Sea otters were nearly wiped out in this coast in a hunting frenzy for their pelts in the 1800s. When their numbers were reduced, the kelp forests nearly disappeared. This was because the favourite prey of the otters - sea urchins - expanded their populations rapidly once they were free of their furry predators. The urchins eat the kelp and devoured the forests up and down the coasts.
It's one of the classic examples of a keystone species. An animal that may not be the most numerous, or obvious, but if removed from an ecosystem has a big impact.
All species have some function in their environment. Most of the time we do not see it, or understand it or make any decisions based on it.