An oystercatcher by any other name 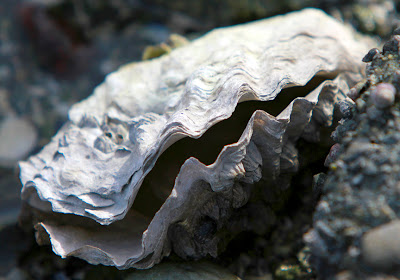 The black oystercatcher is not quite correctly named.

It could be called the black limpetcatcher, or the black musselcatcher to be more accurate in terms of what this shore bird eats.

Described as "just plain comical" by Nancy Baron and John Acorn in their Birds of Coastal British Columbia guide book, some researchers are taking this bird seriously. 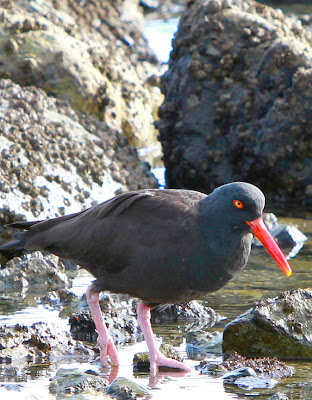 The Pacific Wildlife Foundation and Parks Canada selected the bird as an indicator species of rocky intertidal community health.
To start that meant learning all about populations and movements to get a baseline measure. It is already known that the species is not threatened. The global population is around 10,000 individuals. Most live in British Columbia and Alaska.
They forage along rocky shores, often in urban settings, making it a good species for measuring the effects of human disturbance.
This fellow at left was boldly stalking the shores of a beach in Sidney, just north of Victoria. About 100 pairs nest in the Strait of Georgia between Vancouver Island and the mainland.
To get the local population data, many birds were banded. Researchers hope people will report sightings here.
Haida Gwaii oystercatchers have orange or dark blue bands on their left leg.
Pacific Rim National Park birds have white bands with black letters on the right leg.
In the Gulf Islands they have orange bands with black letters.
BC mainland coast oystercatchers have yellow bands with black letters.
If you see a banded oystercatcher, note the band colour and numbers (if visible) and your location.
Posted by Heather Reid at 4:40 PM